If you are planning to sell your IT services firm, you need to understand why a buyer will pay a high price for it. Understanding the reason why potential acquirers are interested in your firm is vital in order to maximize your chances to get an Optimal Outcome.

To find out the main justifications of acquisitions in the IT services space, we analyzed over 500 acquisitions from the last five years of privately held IT services firms. Our sample contains firms from all over the world. But due to the stronger M&A activity in the US and Europe, most of the firms in our sample are located in North America (276 deals), with Western Europe the second largest group (161 deals). The remaining companies are spread across the rest of the globe.

The majority of the acquirers in our sample stated that their main reason for acquiring an IT Service firm was to “completing their services portfolio.” This is consistent with the need to keep up with the ever-changing demands of their clients and the accelerating evolution of technologies. These acquirers use M&A to fix a gap in their portfolio and are better served by the acquisition of a focused IT services firm that will address the right point problem without the need for in-house R&D.

Consolidation is the second most common reason for acquisitions of IT Services firms, but it is a distant second with only 20% of the deals made with scale as the rationale.

Access to a specific geography or a market segment accounted for (respectively) 14% and 11% of the transactions in our sample. 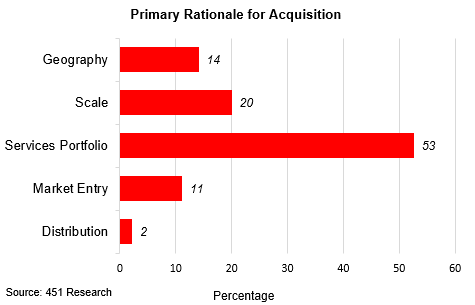 While each of these rationales is common when justifying an M&A transaction, the fact that we are seeing most of the deals aimed at increasing the skill set of the acquirers is a sign of innovation and quality of the IT services market.

A takeaway from the above data is that focus increases the value of an IT services business which is a reflection of Corum’s Focused IT Services trend. An acquirer that is looking to complement its portfolio, with a specific set of services will be better served by a focused company than by a generalist one. Therefore, a focused firm is likely to get more interest from most acquirers and consequently a higher exit value.

Publicly Listed IT Services Valuations At A Historic Height

Now that we understand better the motivation of acquirers of IT services firms, let us have a look at the recent valuations in the IT services sector. Web Design And Marketing Services Get Above 2x Multiples Of Sales

For these 142 transactions, we figured the average revenue multiple by type of services offered and found that Web Design and Marketing services are the two domains that claimed higher multiples with both valued at 2x revenue on average. In this case, the higher multiples (which had usually been below 1x), are due to a positioning in innovative and high-growth market segments.

But even IT services firms that are focused on traditional markets, such as Systems Integration and Technology Management-consulting, saw exit multiples in the range of 1.2x to 1.6x revenues. This is particularly high compared to historical averages and can be explained by a stronger demand for technology services. Shortage of skills is also part of the explanation as it gives sellers of IT services a stronger negotiating power than they had in the past.

General IT services providers are usually acquired at lower multiples than their specialized competitors and that is also the case in our study. But they too benefit from the general increase in multiples. In our sample, generalist IT services sold on average for 0.8x revenues, up from a historical average equal to 0.5x.

The majority (53%) of acquisitions of IT services firms, over the last five years, are made to complete the acquirers’ skill set and allow them to keep up with the accelerating pace of innovation. The pursuit of scale comes at a distant second position explaining 21% of acquisitions. Acquiring a firm to enter a new market or geography explain the remaining acquisitions with respectively 11% and 14% of transactions.

Publicly listed IT services firms trade for higher multiples of revenues and EBITDA than they used to do five years ago. This is due to a stronger demand for IT services, particularly for those related to innovative and disruptive technologies. The increase in multiples of publicly listed companies, which are used as a benchmark for valuing private transactions, has had an upward impact on multiples used to acquire privately held ones.

The valuations of privately held IT services are highest among IT services that are focused on innovative and high-growth segments such as Web Design and Marketing Services which see multiples equal to 2x. But a focus on even a traditional segment, such as systems integration, gets a valuation multiple, in the range of 1.2-1.6x, which is significantly higher than historical averages.

This makes it a great time for IT Services firms to get out into the market and be acquired by companies that are looking to round out their portfolio or consolidate their sector. But one should keep in mind that the above-mentioned multiples are averages and that only the execution of a professional M&A process can guarantee, to the seller of an IT services business, an optimal outcome.